We’d like to say a big thank you to Mark Brooks, who has run, walked and cycled his way through a series of challenges every month of 2021, all in support of Leeds Children’s Charity at Lineham Farm.

His challenges included doing 100 press-ups a day in February, completing The Three Peaks, a coast to coast bike ride plus many more.  We helped celebrate Mark’s last challenge this December when he finished a 13 mile run finishing at Lineham Farm. We were so glad to be there along with his family and friends to see him finish through the line!

So far Mark has raised more than £4,000, with help from his wife Bekki, who has done collections and hosted family fun days to boost the charity pot.

In Mark’s words: “I’ve done fundraising challenges in the past but this year I wanted to do something a bit more substantial to raise as much as possible. In January I started by running 5k every day. It wasn’t the best time to do it but I thought if I am going to do something I need to start on something good! In November, I did my first ever marathon which was tough going. I always said that I really want to do a properly organised marathon next year, but after doing it this year I’m not I’m not so sure. I’ll probably change my mind and do other ones but in the aftermath of it I was thinking: ‘I don’t want to be doing that again’. I’d probably say the coast to coast was quite the most difficult challenge as I’m not really much of a cyclist, I’m more of a runner. That was a 140 mile bike ride in two days up in Cumbria, so that was tough but I had my dad and my brother with me on that one so that helped.

I don’t think I’ll be doing 12 in 12 again, I think all of January I’ll just be resting – it’s been quite the challenge – but I want to continue raising money.”

WELL DONE MARK, you’re an inspiration. Your help means the world to us and we’re now one step closer to brightening children’s lives, thanks to you. 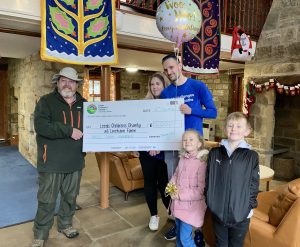